03/04/2013
In a lucid dream I saw a white tree on a shoreline at the foot of a snow-clad mountain, so I decided to paint it. The tree in my painting mutated a bit from the traditional English upright tree I actually saw to an old weeping tree. Similarly the snowy mountain turned into the holy Mount Kailash in Tibet which is shaped like a woman's breast with the nipple pointing up at the sky.

I think the dream may have had something to do with Seahenge on the north coast of Norfolk. This was a Bronze Age wooden circle on a remote stretch of the beach behind a nature reserve near Hunstanton. It was dug up for preservation at the Flag Fen museum by archaeologists, amid great media controversy and against the wishes of protesting locals and Neopagans who said that the action was destroying a unique site of national interest and was disrespectful to the beliefs of the people who originally put it there.

The TV programme 'Time Team' took part in the dig alongside the archaeologists and footage of the conflict with protesters was shown on national TV. 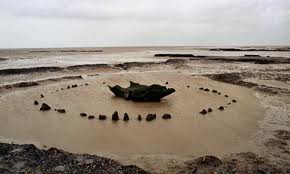 I've been to that beach. It is deserted and wide with very shallow sea that gets as warm as a bath in mid-summer. A circle of wooden posts were found in the sand around a central tree that had been buried upside down with its roots in the air. I found this idea shocking for some reason, a perversion of the natural order of things. Archaeologists think it dates back to about 21BC but "they" don't understand its purpose other than that the site had a ritual significance.

Through the dream I now think the tree was buried upside down to evoke a reflection, a mirror image in the air above and in a higher plane. Through this the Bronze Age people wanted to access higher spiritual planes... and that's why I've called this painting "The Portal".
Portraiture, the Atelier Tradition & Natural Light
Cured of Klimt After Visiting "Facing The Modern"
Next
Previous