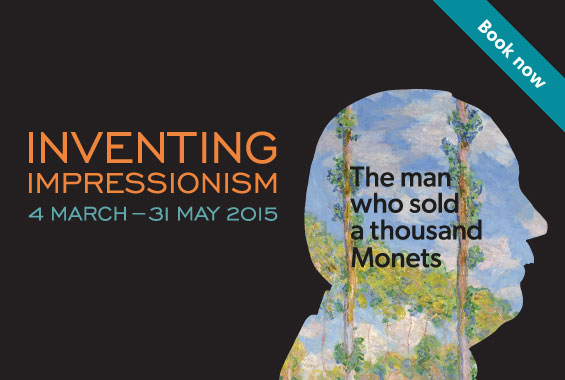 Today I met my eldest daughter, Katie, (the one just finishing a degree in nursing) at Trafalgar Square after dropping off my painting at the Mall Galleries for the next round of judging for the New English Art Club Open Exhibition. We had lunch in the restaurant in the Sainsbury Wing of the National Gallery and then went down to their latest exhibition ‘Inventing Impressionism’.

We saw in the exhibition a large collection of paintings that had gone through his hands, many of which are very famous. I particularly enjoyed a series of paintings of Poplar trees by Monet done at different times of the year. But one of the things that struck me was how bad some were, how awkward and amateur the colouration. I guess they weren’t all geniuses all of the time.

“So how long do you think it took to paint that one?” asked my daughter, looking at a Pissarro.

“About two days,” I answered. She was shocked.

“But they would say it took them a life-time of practice to be able to paint like that,” I protested. She wasn’t convinced.

“That one’s bigger and has lots of detail so it could have taken a week,” I said pointing to a painting by Monet of a cliff top over a blue sea. She still wasn’t happy.

But it was a very interesting exhibition and it made me think that perhaps I should be a little more patient with my art gallery owner.
Van Gogh At The National Gallery
Royal Academy's 'Painting the garden: Monet to Matisse'
Next
Previous