Cured of Klimt After Visiting "Facing The Modern" 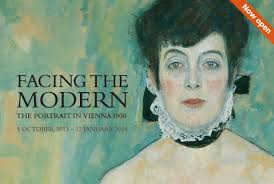 Klimt's Amalie Zuckerkandl
Yesterday I went to see "Facing The Modern, The Portrait In Vienna 1900" at the National Gallery in London as part of my birthday treat. The story behind that period and state was fascinating. The actual period covered by the paintings ran from the start of the Dual Monarchy of Austria-Hungary in 1867 until its dissolution in 1918.

We saw mass immigration into their thriving economy, the rise of revolutionary movements across Europe, the new cultured middle classes who enjoyed their hey day with pomp and circumstance...through to the decay of their society following strengthening Nazi anti-Semitism when the middle classes just went home and became angst-ridden. The period was turbulent and artists responded accordingly. There were magnificent classic portraits through to psychologically tortured masterpieces by Egon Schiele and Oskar Kokoscha.

One of the themes I noticed was death even before I got to the "beautiful corpse" section of the exhibition. The suicide rate amongst the young people was distressingly high - mostly from failed love affairs as far as I could work out. Then there was the high infant mortality rate, deadly epidemics, including TB, pneumonia and especially the flu that killed many artists at the end of the First World War. It killed more people than the war did. Then there were the Nazis who killed some of the wealthy Jewish people whose portraits were on exhibition. The whole exhibition had a doomed "Titanic" quality to it.

And against all this human drama we were presented with Klimt's pretty "little" portraits. Now I know Klimt painted many pictures on the theme of "death and the maiden" but this exhibition was about intimate portraits. His ephemeral work looked almost like an insult to what his sitters were going through. I know we are looking at them with the benefit of hind-sight but, but, did he have no insight? I was a fan and now I've been royally cured.

Klimt's portrait of Amalie Zuckerkandl was in the exhibition and heavily used in its promotion. Next to it there was a brief piece of text saying that Amalie had converted to Judaism on her marriage, had her portrait painted and was later taken by the Nazis to a concentration camp and never heard of again.
The Seahenge Painting
The Hungry Eye
Next
Previous