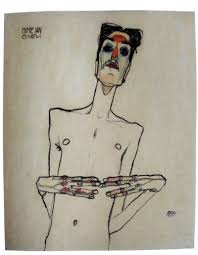 Erwin Dominik Osen by Egon Schiele
It was the day after my birthday and I treated myself to a trip to London to see an exhibition and visit my daughter who is a student nurse with St Bart’s. At the flip of a coin I decided to see the Egon Schiele exhibition at The Courtauld Institute. When I arrived I was amazed to discover room after room of famous Impressionist and Modern paintings that I knew from books but had never seen in the flesh. What joy. What a treasure trove. I kept that pleasure for later and went straight away into the Egon Schiele exhibition which they called ‘The Radical Nude’.

I’m no prude – no honestly - I’ve got five kids and I grew up in the sixties, but I think the curators went out of their way to find drawings where the women’s genitals were most on display. Literally. And painted red. And red nipples. And faces that looked like dolls. Which is odd as Egon Schiele drew some fascinating portraits. So I believe the exhibition was skewed to deliberately shock.

Now I know these drawings were done by a very young man who wanted to shock and break taboos – how quaint – but the overall effect of the exhibition was brutal. Women were posed to deliberately expose their vulvas for the lascivious gaze of men. These weren’t women glorying in their own sexuality. My feminist principles were further antagonised by the wilfully artful commentary posted next to each piece.

I’ll give you an example–‘Sick Girl’. It was a charcoal outline drawing on brown washed paper of a naked little girl lying down, thighs squeezed tightly together and both of her fists jammed into her mouth hiding most of her face, except for her eyes. To me, as a woman and mother, she looked frightened. I wondered whose child she was. The artist had coloured only her hairless labia pink and the surrounding area was contoured in white gouache, the rest of her body remaining an outline. Here’s the exhibition commentary: ‘By emphasising the girl’s genitalia with a halo of white, contrasts her pre-pubescent youth with her pallid deathly face.’ Oh, please. Are we looking at the same painting?

Schiele’s excuse was that he was a young man with only one thing on his mind – sex. But what was the curator’s excuse? Perhaps we were spared the worst of it.

Now another young man who liked to draw sex was Aubrey Beardsley. But I like his little fat Duchesses running around semi-naked next to tiny men with huge phalluses. So is it just a matter of taste? I don’t think so. Beardsley never debased women like Schiele did.
‘Reality’ at the Sainsbury Centre for Visual Arts in Norwich
Ben & Winifred Nicholson's Works at Dulwich Picture Gallery
Next
Previous